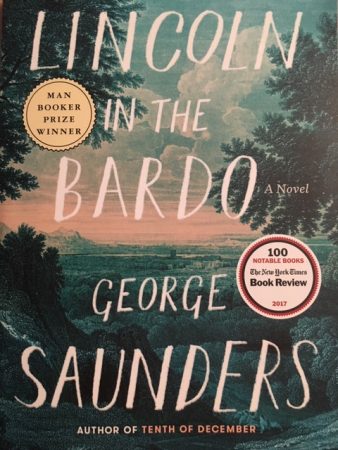 I recently enjoyed a rich book club discussion about the weird and wonderful Lincoln in the Bardoby George Saunders. Only a few of my fellow readers made it all the way through the book, which did not surprise me, as it is a strange book. I was confused for about the first fifty pages, then fell in love with it.

One of our discussion points circles back to my last blog—the difficulty of letting go. In this story, literally letting go of life. Accepting death and moving on into the utter unknown. Not easy!

The other thing that has stuck with me about the book is the lengths to which humans will go to believe what they want to believe. These spirits cannot allow themselves to believe they are dead, so they don’t. They bend and stretch and fold their world in such a way as to maintain the obvious lie that they are still alive. And this works because it is a mass, communal deception. As long as they all perpetuate the falsehood, they can live as if it is truth. When some of them begin to doubt and question the lie, it becomes harder and harder for the rest to avoid reality.

We all have maps of the world, and those maps are often filled with untruths, yet we go to extreme measures to avoid redrawing our maps because we want so badly for them to be accurate. It’s hard to face truth and people tend to prefer easy over hard.

This struggle with truth also came up in the HBO show Chernobyl, which addressed mass deception on a societal level. The USSR, as portrayed in this series, seems structurally designed to deceive in order to perpetuate the belief that they are infallible and thereby to maintain power. The counterbalance in the story comes from the scientists trying to contain the disaster and prevent future meltdowns. By the end of the show, the dispirited character of Valery Legasov realizes, “To be a scientist is to be naive. We are so focused on our search for truth, we fail to consider how few actually want us to find it. But it is always there, whether we see it or not, whether we choose to or not. The truth doesn’t care about our needs or wants. It doesn’t care about our governments, our ideologies, our religions. It will lie in wait for all time. And this, at last, is the gift of Chernobyl. Where I once would fear the price of truth, now I only ask: ‘What is the cost of lies?’” (Climate change anyone?)

In Lincoln in the Bardo, the cost of the spirits’ lies is to be stuck in this limbo of their own creation, and that cost is acceptable to them because the truth is utterly terrifying. Yet when they are faced with Willie Lincoln’s horrible fate, the cost of their lies rises, to the point that honesty is preferable and unavoidable, a point I would love for us all to get to at some point in the near future.

And yet, at the same time, my new favorite song is Pink’s “Can We Pretend”, which is all about the desire to fool ourselves, and it sounds great! Even to me, who is in every way trying to live an authentic life, there’s still that part of me that wants to pretend to be 22, dancing on the tables with my BFF. The lies are tempting, pretending sounds fun, but I choose to live in truth. Who’s with me?