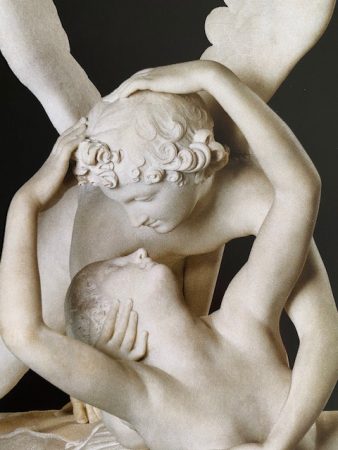 I recently came across this postcard I bought last spring at the Louvre in Paris, an image of a statue I love called “Psyche Revived by Cupid’s Kiss” by Antonio Canova.

A few weeks before I left for Paris I was designing my new author web site and looking for images to use for my mock book covers on the site. One that I kept going back to for my book FIVE DAYS was this image “Psyche Revived.” I ended up not choosing it because I thought it was too esoteric and didn’t match the style of the book, although I was sad to let it go.

I was drawn to Psyche and Cupid’s romantic beauty, even more so as I learned about their story and drew similarities to my own story of Alexa and Trey. Greek mythology tells of Cupid poking himself with his own arrow and falling in love with Psyche, as Psyche does likewise later, both thereby overtaken by feelings that are beyond their control. They are kept apart by a variety of roadblocks, but in the end Cupid revives Psyche (who has fallen into a magical sleep—living yet not alive) with a kiss, awakening her, bringing her back to herself and to him. A classic romance, for which I am a sucker.

I had no idea this sculpture was at the Louvre. I wasn’t looking for it. I simply wandered by and luckily it caught my eye. I admired it for quite some time, believing there was some meaning in it being there, in my spotting it—something destined to happen, much like Alexa and Trey or Psyche and Cupid. Okay, perhaps I was caught up in the romance of Paris, that would be fair to say. But it still resonates with me.

The thing is, I had forgotten about it again in the months since Paris, until I saw the postcard. And I was once again caught up in the image and the story and the romance and the beauty.

I can buy a cheap reproduction on Amazon for $49.95…I just checked…