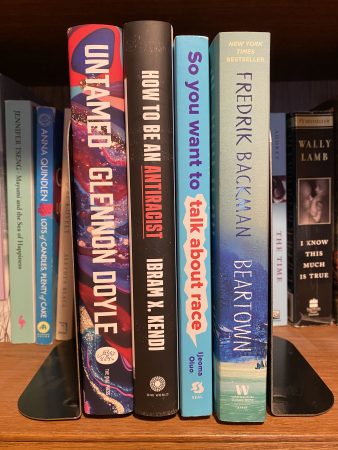 I’ve been on quite the reading rampage lately, including a group of books that has made my head hurt in the best possible way…expanding and impacting my mind in hard but powerful and important ways.

I read Ibram X. Kendi’s How to be an Antiracistand Ijeoma Oluo’s So you want to talk about raceto learn more about how I can move forward differently in the world when it comes to race, inequity and injustice—to learn about the flaws in my thinking, the unacceptable complacency on my part with regards to these issues, and to start the process of supporting and demanding change.

It was sheer synchronicity that I bookended these texts with Glennon Doyle’s Untamedand Fredrik Backman’s Beartown. Backman’s book was the last one I read, a story about a town full of people who, for various reasons and to varying degrees, avoid seeing the truth or see it but pretend it isn’t true because it is too hard to stand up to powerful people, too scary to stand against the bullies. I’ll start this particularly long blog with a passage that articulates our current cultural climate, although it’s actually a timeless observation.

“Hate can be a deeply stimulating emotion. The world becomes much easier to understand and much less terrifying if you divide everything and everyone into friends and enemies, we and they, good and evil. The easiest way to unite a group isn’t through love, because love is hard. It makes demands. Hate is simple.

So the first thing that happens in a conflict is that we choose a side, because that’s easier than trying to hold two thoughts in our heads at the same time. The second thing that happens is that we seek out facts that confirm what we want to believe—comforting facts, ones that permit life to go on as normal. The third is that we dehumanize our enemy. There are many ways of doing that, but none is easier than taking her name away from her…

(I’m excluding a paragraph here because it is a spoiler for the book, and I hate spoilers)

…It doesn’t take long to persuade each other to stop seeing a person as a person. And when enough people are quiet for long enough, a handful of voices can give the impression that everyone is screaming.”

I have never thought of myself as a racist person. Yet Kendi points out that being not racist is not at all the same thing as being antiracist. Being not racist still makes me a complicit bystander doing nothing (or certainly not enough), as opposed to being antiracist, “one who is supporting an antiracist policy through my actions or expressing an antiracist idea.” So here I am expressing some antiracist ideas, although one silly blog is certainly not enough. It’s simply where I’m choosing to start.

Our country is full of conflict right now. It is tempting, and oh so easy to hate and take sides and draw lines in the sand, to listen to the facts we want to be true and ignore those that we don’t like. Instead, I want to welcome the complexity, even though it is hard and exhausting and leaves me feeling a bit shaken.

I know, love and admire quite a few police officers, good people who are doing their best to protect and serve. Yet I also absolutely believe that our “justice” system is broken and racist and needs to be majorly, fundamentally overhauled. I never knew that “our police forces were born from Night Patrols, who had the principal task of controlling black and Native American populations in New England, and Slave Patrols, who had the principal task of catching escaped black slaves and sending them back to slave masters” (a quote from Oluo’s book, cited from Victor E. Kappeler’s “A Brief History of Slavery and the Origins of American Policing”). Did you know that? Why didn’t I know that? Why am I just learning now that from the beginning, police were there to protect white people and their property, not designed to provide fair protection to all people? Given that truth, my friends and all the other good cops out there doing their best will be limited in their ability to do good until the system is overhauled, made into a system that protects and serves all our citizens equally. I learned this by reading a book by a scholar who has studied this topic, who has lived a different truth than mine, who comes from a different background and has a different perspective on things. And thank god for that.

Likewise, I love teachers. Many of my favorite people, including my husband, sister and Dad are teachers. And yet the education system is broken. The school-to-prison pipeline is a real thing that is hurting kids and causing our society to miss out on all this amazing potential. Oluo shares a powerful story about talking with a friend whose black son had been expelled from school for assault…he was a 5 year-old kindergartener! There are no 5-year-olds who assault anyone! Kendi shares a similar experience about getting in trouble at school, and there are plenty more stories like that. I guarantee you that would never have happened to my white sons. That is my privilege—to not have to worry about that—although I should be worried because, as Doyle points out, there is no “my kids” and “your kids.” It’s really only our kids.

Standardized testing is racially biased in a plethora of ways. Police in schools perpetuate a view that kids are already criminals. Funding needs to be redistributed in a way that offers equitable opportunities to all students in all communities. We need to stop pretending that “history” equals white, European history and “art” equals European art. I am as guilty of this as anyone, teaching FAME as a volunteer in schools for years, but only teaching about white artists and musicians, almost entirely men. I never thought that was racist or misogynistic because those were the only artists I knew. I thought I was teaching what was most important, but I was wrong; I was simply teaching what I knew, which happened to be through a racist and misogynistic lens. I’m not going to beat myself up about it, but I am going to move forward differently, being more informed, making different choices.

And this is exactly what I’m talking about. We all need to be willing to look at our own racism. We need to be open to evaluating our thoughts and actions based on new learning, get curious about how we can be allies and grow an equitable society, change our behaviors as we become aware of our mistakes. Education and policing are only two of the many examples of racism that Kendi and Oluo explore, but they are the two that resonated most strongly with me.

Glennon Doyle observes that “destruction is essential to construction. If we want to build the new, we must be willing to let the old burn. We must be committed to holding on to nothing but the truth.” She also writes about her realization that “we can do hard things.” Change is hard. Looking at our own mistakes and biases is hard. But we can do those things. And we must do them together. I can’t do hard things alone, but I can do them in community.

Ibram Kendi’s ends his book by summoning hope that we can “ignore the odds and and fight to create an antiracist world.” We need to let the old burn…our false faith in systems that don’t work for everyone (and were never designed to); our comfort in the policies that work for us but not for so many others; our belief that we are good “not racist” people, so we don’t need to do anything to prove it; our fear that we will be called out for holding and perpetuating racist ideas (we will and we should be). We must allow ourselves to learn a new truth, to act on that truth for the well-being of all, not just our own well-being.

I’ll end this with a final quote from Kendi, from his uplifting last page:

…Once we lose hope we are guaranteed to lose. But if we ignore the odds and fight to create an antiracist world, then we give humanity a chance to one day survive, a chance to live in communion, a chance to be forever free.”

I’m writing this blog to share my thoughts and reflections over the past month while reading and digesting all these amazing books, watching the news, talking with others. I’m also writing it to hold myself accountable. I want to hear what you are doing to be antiracist, so that I can join you, learn from you. I want to know what you’re reading that’s broadening your perspective on racism in America. I also want you to call me out and ask me what I’m doing. Not just today, but next week and next month and next year. We have to believe we can create change, we have to learn what needs to be changed, and we have to act to create change. I hope I can do my part. I hope we can do it together.