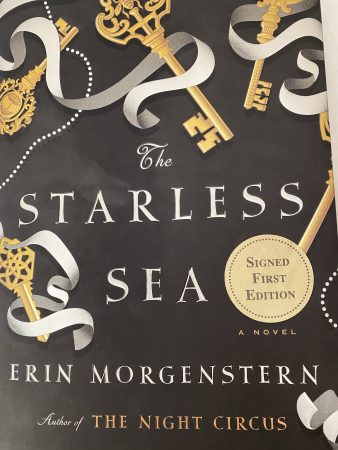 In case you didn’t know, I read a lot. I read a lot of good books, a few great books, and a couple of times a year a fabulous book that takes my breath away. (I also read some bad books, but more and more I don’t even finish those, since I don’t want to spend time on a story I don’t like when there are so many out there that I might love!)

I just finished Erin Morgenstern’s The Starless Sea, which is one of those magical tales that utterly transported me (and given the state of our actual world right now, who can’t use a little transporting?). The absolute beauty and poetry of her writing spoke to my heart and soul more than to my mind. It felt kind of like reading an impressionist painting…you pretty much know what it is, but it’s still a bit fuzzy…more about how it makes you feel than what it actually is. About halfway through the book, I didn’t really know what was going on AND also knew that when I finished, I would start it all over and read it one more time, just to let those words flow over me again. Now that I’m done, I’m still not exactly sure of what was going on AND also entirely loved it.

Erin Morgenstern creates a world, a completely imagined fantasy world, yet also completely true. She weaves stories into and out of, over and under and through, other stories, characters that intertwine in ways that I almost come to understand but not quite. But I feel them. They feel real, in a world that is not, but still kind of is. For those of you who read Morgenstern’s The Night Circus, this has that similar mystical vibe. The plot and characters are right at your fingertips yet somehow elude your grasp. It’s really hard to describe and must have been so much harder to write.

As a writer, I am simultaneously jealous and deeply grateful for her gift. The stories I write are created from my imagination, but they are grounded in things I have experienced personally or vicariously, and they occur in real places that I have seen or read about or know something about. The Harbor and the Starless Sea are utterly unique creations. Until Morgenstern wrote them onto a page, they existed only in her mind, and before she thought of them, they did not exist at all.

The other reflection I had as I read this book was being reminded that a story isn’t really about what happens…that’s the plot, and it’s not the same thing.

A story is about change. It’s about tension and conflict. It’s about what the protagonist desires and what gets in the way (usually fear of something). It’s about characters discovering who they are and becoming who they want to be or who they were meant to be. That’s a good story. Or, at least, those are the stories I like.

I’m pretty sure I’ll never be able to invent an entire world in the way that Morgenstern creates hers; those aren’t the kinds of stories I write. But I do strive to create characters who resonate as much. I hope to share existential journeys that reflect a common human experience while also being unique and special. Books like The Starless Sea inspire me to keep reading and writing, to share in this whole endeavor of storytelling, which is really what her book is about (I think! Maybe? You read it and let me know!).