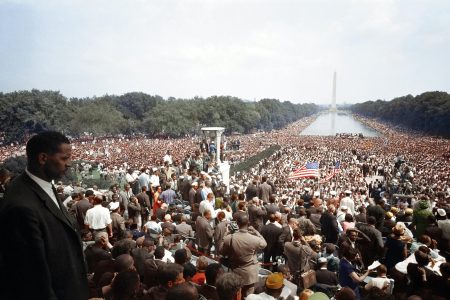 I am trying to be hopeful about the inauguration and the start of a new administration, but I’m honestly mostly scared and worried. I’m worried about violence tomorrow. I’m worried about Biden taking office and nothing really changing. Reflecting on the March on Washington and the events of the past year and the past few weeks, it feels at times like so little has changed. It is perhaps as difficult now as it was in 1963 to believe in Martin Luther King Jr.’s dream, “to hew out of the mountain of despair a stone of hope.”

In honor of MLK Day, I watched the movie One Night in Miami this weekend and have recommended it to many people in the two days since. It is a powerful film with amazing performances, a fictionalized imagining of the real-life gathering of four friends, Malcolm X, Muhammad Ali (still Cassius Clay at the time), Jim Brown, and Sam Cooke, in February of 1964.

My thoughts immediately after watching the movie were about the civil rights movement and these four men’s differing approaches to the struggle. I am speaking here from the representation of the movie, which may or may not completely align with the historical facts. The Malcolm X character is the most adamant and unwavering in his belief that standing up, speaking out, and fighting the morally righteous fight for justice and equality is of primary and undeniable importance, despite the high costs and grave risks involved. He does not believe and will not consider that there is a middle-of-the-road option. Sam Cooke (played by the butter-voiced Leslie Odom—listen to the soundtrack!) represents an opposing view that achieving financial success and fame gives him power and freedom in another way, without the direct fight. Jim Brown represents the middle ground, recognizing some obligation to the fight and also believing that his own power rests in his celebrity and financial freedom, and that balancing the fight with his image is vital. Cassius Clay is twenty-two years old on this night, the youngster of the group, exploring where he is going to land on these important questions.

The other resonant, powerful part of this movie for me was the dynamics of the friendships. They have differing viewpoints about this historic moment in time, bitter disputes about how to achieve equality and assure justice, conflicts about values and integrity. It spoke very much to my own struggles with friends and family who I love and also fundamentally disagree with about value choices in this historic moment in time. Many of us feel like this is a defining moment, like the stakes are critically high, and that those who disagree with us are threatening the future—for our planet, for our country, for my kids. These are huge discrepancies that are difficult to overcome.

Be advised: slight spoiler alert here. Just warning you because I hate spoilers!

In the movie, these friends seem to reach some common ground, find a way to see each other’s perspectives and respect each other’s choices. Yet in doing research about their real lives, it’s hard to believe that is how it really would have ended up. Two of these four men were dead within a year of this night together. One ended up being a Trump supporter. Cassius Clay chose the Nation of Islam over his friend and mentor, Malcolm X. So maybe these differences are too elemental to overcome. Or maybe not. I’m not sure…either for myself or for these fictional characters based on real men. For myself, only time will tell.

Going into tomorrow, all I can hope for is healing and unity. Yet these cannot come without change. I do not want—or think it’s possible—to move forward in this country without accountability and systemic, fundamental overhauls in many areas—justice, education, health care, economic disparity. Growth is painful. Yet it is also natural and beautiful and leads to new possibilities. Let us hope that’s where we are headed. And let us hope tomorrow is peaceful.