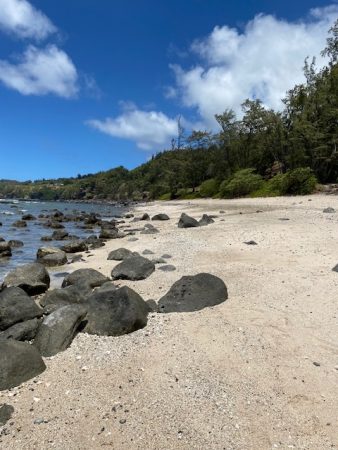 I was vacationing in Hawaii last week and was re-inspired to blog. So this is the first in a series of blogs I wrote in Maui, because my mind was quiet and my body was relaxed and I had room in my brain to think wonderfully rambling thoughts and see where they went.

Speaking of seeing where things go, Ken and I went for a drive one day to find a trail to walk/hike on in Kapalua, just north of Kaanapali Beach where we were staying.

We never found it.

Instead, we found adventures we weren’t looking for and didn’t expect, making for a perfectly delightful day.

We knew we were driving too far and had passed the hike, but we decided to keep heading north into Upcountry Maui, where we had never gone before. It was a curvy, beautiful road leading along gorgeous views of the coast and lush twists and turns of jungle-like foliage. We passed an obviously popular snorkeling bay, with tons of cars lining the road and catamarans anchored in the water.

We eventually arrived at Nakalele Blowhole, which I’d never heard of or seen, despite my numerous trips to Maui. As we were hiking down to the blowhole, a man coming up was trying to be helpful, telling us that it was a waste of time, as it was low tide and not blowing big water. We thanked him and kept going.

And he was right about the water not blowing in the advertised dramatic spouts (best seen at high tide, which this was not). But he was wrong about it not being worth it. The water along the shoreline here was beautiful and relentless, a swirl of aqua and turquoise and sapphire, churning and crashing against the rocks. The area looked like a moonscape, and we climbed around and took a bazillion pictures of the crashing waves and even got a few shots of some small exhales from the blowhole.

It made me sad for the man who’d said it was a waste of time. True that he hadn’t gotten what he came for. But if he’d been open, he would have seen that there was unexpected beauty all around. He missed the stunning awe of the surf in his disappointment with the blowhole, and that was a loss.

That’s happened to me plenty, missing out on a good thing because I’m focused on the next thing, or the thing I’d planned for, the thing I’d expected. But I’m glad it didn’t happen yesterday because the next part of our day was my favorite part of our trip.

After the blowhole, we drove back the way we’d come. We pulled out at all the scenic overlooks and took pictures of the breathtaking shoreline. At one of these overlooks, we saw a mostly empty beach, with what looked like tidepools or some kind of coral or lava rock shelf. I suggested we go check it out, so we parked on a dirt pullout on the side of the road and hiked down to a gorgeous beach with about six people on it—a father and son digging in the sand, a group of women sunbathing, another couple exploring.

It was a little slice of heaven after the days on crowded Kaanapali Beach, more crowded than I’ve ever seen it before. But that’s another blog.

We waded in the shallow water filled with lava rocks. We found a little pool to soak and float in, a private little sphere all our own, sitting in soft sand, leaning back against a smooth, slippery rock, watching the surf break on the rocks out beyond us, then the water flow gently toward us, bringing a cool infusion of fresh water into our little pool. Then the pool would start to warm again just as another wave brought a fresh infusion of cool.

This hidden gem was a highlight of our trip. This peaceful oasis in the bustling world. It filled me with joy and with hope. Hope that there are hidden gems out there. Joy that for a couple of hours, I was completely, one hundred percent present, at one with myself and my husband and Hawaii and the ocean and the sun. Mahalo, Maui.