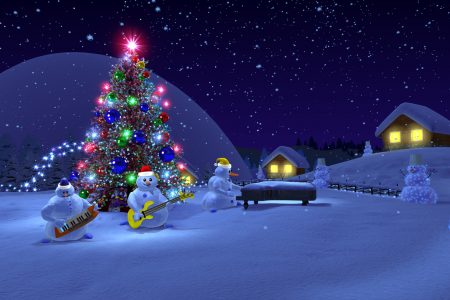 As much as I love holiday movies, I think I love Christmas music even more. From the day after Thanksgiving until the New Year, pretty much all I listen to is songs of the season. That much listening requires a lengthy playlist, which I most certainly have. Lucky for you, I am willing to share…

Clearly there are classics that you already know and love and don’t need me to name…Bing Crosby’s White Christmas, Mele Kalikimaka, Christmas in Kilarny…who else can picture that album cover? Elvis singing Blue Christmas. Gene Autry’s Rudolph. Nat King Cole singing The Christmas Song. Plus, the more recent go-to’s: Mariah Carey’s All I Want for Christmas, Elton John Step(ping) into Christmas, John and Yoko with So This is Christmas, Bruce’s Santa Clause is Coming to Town, Wham’s Last Christmas. All great stuff!

And then there are the less well-known originals that are some of my holiday favorites: A New York Christmas by Rob Thomas, Air Supply’s Love is All (yes, I said Air Supply!), Darius Rucker’s Candy Cane Christmas, Brian Setzer’s Boogie Woogie Santa Clause. And some more widely known, recent originals: Kelly Clarkson’s Wrapped in Red, Every Christmas, and Underneath the Tree, John Legend’s jazzy Bring Me Love, the Jonas Brothers Like it’s Christmas, and (this year’s new favorite for me) Darren Criss singing All Those Christmas Cliché’s.

There are also a couple of full albums that I try and listen to every year, bringing me back to my childhood. The Muppets with John Denver…Alfie the Christmas Tree makes me cry every time! Dolly Parton and Kenny Roger’s Hard Candy Christmas. Amahl and the Night Visitors…a Christmas opera that I look for every year to see in person but have only ever seen on PBS as a recorded stage production. The Twelve Hits of Christmas was my actual favorite childhood Christmas album, but can’t get that one on Apple Music, so I have to recreate it…Alvin and the Chipmunks, Spike Jones…lots of goofiness on that one!

Lastly, there are simply the most beautiful voices in the world singing holiday classics…O Holy Night or Silent Night by Martina McBride or Celine Dion or Josh Grobin…pure loveliness. Whitney Houston performing Who Would Imagine a King. Michael Bublé and Leslie Odom, Jr. singing anything, especially Christmas. Voices of angels!

So this turned into more of a list than a blog, but that’s what it is for today. Next week, we’ll explore the remaining three senses…what the season smells and tastes and feels like. For now, lean into the joy of listening, a direct line from your ears to your heart, inspiring the love and hope and laughter and fun of Christmas.