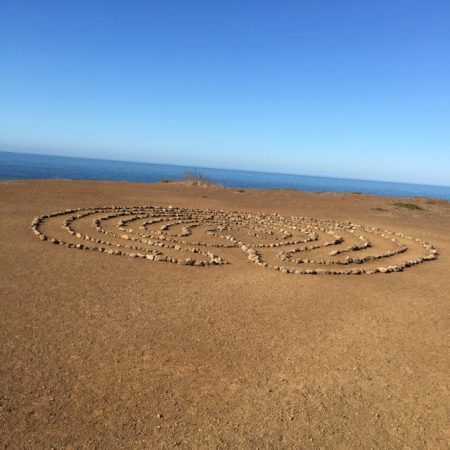 I went hiking in the Marin headlands yesterday, a clear, beautiful fall day in the Bay. I followed the coastal trail that starts at Rodeo Beach, the initial view looking back over the beach, the waves meeting the dark sand, the light from the late afternoon sun sparkling on the water. The shoreline on a clear day is breathtaking (on a foggy day eerily haunting). As the trail winds farther up and along the cliffs, the views change to dramatic drop-offs, the surf pounding far below, pelicans and gulls soaring overhead.

I’ve hiked here before but am not intimately familiar with the area. I followed a trail that I had taken before, but I apparently made some different choice today because I ended up at an outcropping with a labyrinth made out of rocks. I’ve never walked a labyrinth, but felt called to walk through this one—I had nowhere particular to be, no particular destination for my hike—merely a wandering hour to exercise and enjoy the coast.

The experience was simultaneously exhilarating and peaceful. I set my intention for a meditative state of mind before I started, prompting myself to mindfully walk and be present right here for my journey. I put my arms out as if I was on a balance beam. I don’t know why. I certainly didn’t need to. It just seemed to somehow anchor me, keep me attentive to the walking rather than any thinking that could easily intrude.

I wound round and round the circle, inward and outward. Something I noticed quite clearly was the way the wind was blowing me. Anyone who’s been on the Northern California coast knows how powerful the wind can be, and today was one of those intensely blustery days. As I walked in one direction, the wind was behind me, pushing me forward, encouraging me to hurry up, go faster. When I wound around the other way, the wind was in my face, slowing me down, making the journey more difficult. Round and round I went, the wind helping move me along and the wind hindering my progress. The wind was just doing what wind does…blowing. The effect on me was beside the point, yet there it was.

I also became aware that I was choosing to walk around and around in the pattern these rocks laid out for me. I could easily choose to cut across anywhere I wanted, take a short cut, stop following the pattern altogether. I was choosing to follow the path, and I could choose not to as well.

I went back this morning for a few reasons. One, exercise. Two, it’s another clear and stunning day. Three, (and maybe most importantly) because my phone died yesterday and I didn’t get any pictures. I’m sorry, but if there are no pictures, did it even happen? (Am I kidding? I’m not quite sure!)

Today the breeze was a mere whisper, so I noticed different things as I walked the labyrinth. Primarily I became aware of sounds—a fog horn sounding off in the distance, a clanging bell from a buoy off in the water, the surf on the rocks far below. I was also aware of my shadow, now in front of me, now behind, now off to the side, as I circled round and round.

What is the point of this blog?

What is the point of a labyrinth?

What is the point of anything, really? Okay, getting existential now!