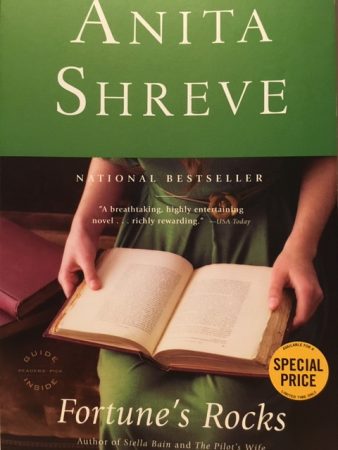 I just finished reading Anita Shreve’s Fortune’s Rocks, which I picked up for two reasons. The first, because I enjoy Anita Shreve books as a rule (which is why I replicated her cover design on my web site). The bigger reason being that another writer told me this tale reminded them of my novel, FIVE DAYS, and so I was curious.

This story is about a fifteen-year-old girl in 1900, who has an affair with a forty-something-year-old married man with four children, who is a friend of her father. My first thought was, ewe…gross! There is no way I can possibly find myself rooting for this relationship…it is wrong in every way. I was a bit upset, even, that someone would think my book was like this. Yes, my story is about a married, older woman contemplating an affair with a younger man…but their age difference is about a dozen years, he’s a full-grown man…it’s different!

Yet the brilliance of Anita Shreve is that I found myself completely invested in their relationship, in the heartbreak of both of their characters and arc of the story. I believed they were in love. It didn’t seem wrong. I wanted them to be together and was sad for them when they weren’t.

And then, I was momentarily touched that this friend had thought my story similar. I say momentarily because in the next moment, I was consumed with self-doubt and discouragement. Who do I think I am? I am no Anita Shreve! I cannot write sentences like, “For had not she and Haskell already entered into that dangerous state of thrall which may be called love or obsession or romance or simply delusion, depending upon one’s proximity to the event and one’s ability to believe in the notion that two souls which stir in the universe may be destined to meet and may be meant only for each other?” Beautiful! When I finished the book, I knew I was a sham, a wanna-be-writer. There are many times I am very aware of other writers being better than me, and usually it doesn’t bother me because they are telling very different stories in very different ways. But this is a similar story, and I am jealous of her skill in telling it.

This happens to me in my writing group as well, I must say. It happened to me at the Squaw Valley Writers Workshop. I feel like the last bench player…the worst player on a great team, which is okay sometimes because at least I made it onto the team…I’m good enough to be there, just not good enough to start, and always worried I’m about to get cut. Again, I’m usually fine with that. I’m grateful to have surrounded myself with talented, amazing writers who have already made me so much better than I was when I started this journey, unpracticed and untrained. And then there are these moments when the envy and doubt creep in and I am faced with the choice of continuing on my journey or giving up.

I’m proud of my choice to journey on. I will continue to learn from those better than I, in order to get better myself. I will continue to write, mostly because I love writing, but also because I love my stories. I will set aside the envy, which is not helpful, and focus on the appreciation I have for the talent of other writers and the inspiration I gain from them to tell my own stories as well as they deserve to be told.