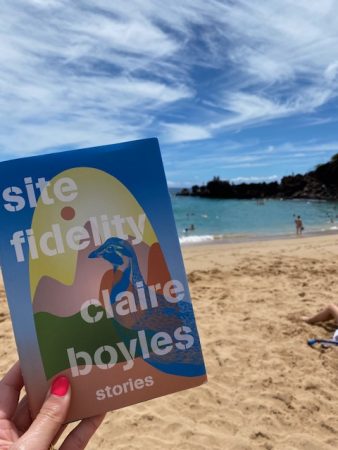 My friend Claire Boyles wrote an amazing short story collection called Site Fidelity, which I read on Kaanapali Beach, and for the past month I have been contemplating this idea that is her title.

Site fidelity is a term in nature that refers to animals returning to the place they were born to have their babies. For example, salmon swimming upstream to spawn or the sage grouse Claire talks about in her first story, called “Ledgers.”

“Site fidelity is a beautiful, romantic idea but it’s also dangerous,” Claire says in the story. It sounds so noble and inspiring to migrate back to where you came from to start anew. Coming full circle. I love that idea. Don’t you?

The problem is that those places aren’t always there anymore. Or they’re not safe, no longer welcoming. The sage grouse will only lay eggs in the place it hatched. So when ranchers or developers or whatever else invade those spaces, the sage grouse disappears. They will not lay eggs anywhere else. They just stop reproducing and die out.

It’s not quite that dramatic for people, but it reminds me of my relationship to places from my own life.

My brother and sister and I hold our childhood home as a part of who we are. It’s like a living part of our family that we lost when it was sold. My siblings have visited and told me about how different it is now, but I won’t go back. I don’t want to see it different. I want it as it was or not at all. For me, it remains pristine in my memory, in my being, in who I am.

In terms of site fidelity, I was born in Hawaii, where I happened to be reading this book. I honeymooned there in 1991, so two beginnings happened for me on those islands. And I’ve migrated back there many, many times.

But it’s different now. Different from 1991, obviously, but even different from ten years ago, or five. And I don’t like it. I want it the way it was, the way I remember, the way I wish it still was. There are people everywhere. Everyplace is developed. It’s overrun and more expensive. I’ve returned to Maui again and again over the past thirty years, but this may be my last trip there. At least for a while. Not because I hate it or because I had a bad time. Neither of those is the case. It’s just that I loved it then, and I don’t think I do anymore. So I may choose not to go back.

This came up for me again last week during my annual migration to Lake Tahoe for Cousins Week—twenty to thirty of us who have gathered during the same week for over 20 years. I still love it, but it’s different—more and more crowded, people’s preferences and choices changing, climate change making an impact on the water and the weather. So will I choose to continue returning there? Probably, but I do have a choice.

Because the thing is, I’m not a sage grouse or a salmon. I can find another beach, another place to migrate, a new favorite place. I can adapt. I have adapted. I adapt all the time, although that doesn’t mean I like it. I’d prefer some things stay the same. But that’s not how our world works. Things change and people adapt.

A few weeks ago, I drove from California to Florida, moving my son across the country because the San Francisco Bay area is too expensive for him to build the life he wants. So he is adapting…looking for a new home, as I did when I was twenty-something and my parents did before me. We were able to adapt.

But we need to watch out for the smallest among us…or at least the more vulnerable among us. We need to take care that they have some places that stay the same so that we don’t lose them. Places matter, and we need to be careful with them. We need to be oh so much more careful with the world. Because even though I don’t know much about a sage grouse, I know I don’t want them to disappear. And as adaptable as humans can be, there will come a point when even we cannot adapt if we don’t change our behaviors to preserve the world that is home to us all.