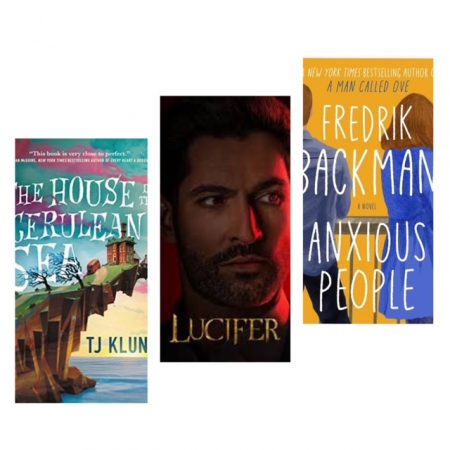 I’ve been doing some existential pondering lately, sparked by a couple of amazing books and kept burning by a terrible show with which I am currently obsessed.

Let’s start with my most recent guilty pleasure, binge watching Lucifer on Netflix. I’m not proud of it because it’s not actually a good show. I mean, it’s not earning any awards or anything. But I am hooked, and it does give me something to think about. In case you don’t know (which you probably don’t because who would watch this trash?!), Lucifer is the very attractive devil who has left hell to party in LA. However, while there, he falls into an unintended journey of self-discovery, realizing that perhaps he can choose not to be evil. That being the devil may be self-determined and that with different choices and intentions he can become a different being. Maybe even human. Maybe. Although he backslides over and over into sex and drugs and all kinds of shenanigans, which gives it the guilty pleasure designation.

Lucifer is used to being viewed as evil incarnate. He’s embraced the bad boy role because his dad cast him out of heaven for being bad, because every story in the world tells him he’s bad, and because he’s used to believing it all. But when he starts doing good, he feels good, and he begins to believe he might not be all bad.

Speaking of…a much more skilled, beautiful and artistic exploration of these same themes propels The House in the Cerulean Sea by TJ Klune, which is about an orphanage for magical children who are seen as freaks by the world. The characters in the story are so vivid and relatable, impacted by beliefs about who they are and what they are capable of, many of which they find to be untrue. In fact, the youngest child in the house is named Lucifer and…guess what…he is the devil’s spawn, which public opinion would say makes him evil, even though he’s a six year old little boy. He doesn’t want to be evil, and being loved and accepted and taught that he has free will makes it likely he will defy those expectations. It is up to him, as other characters also learn throughout the book. The adults, in particular, learn that they are what they choose to do, rather than doing things because of who they are.

Similarly, in Fredrik Backman’s Anxious People, a group of random hostages and police confront their own choices and ideas about who they are and how they want to move forward after this life-altering experience. The book paints these very real characters, imbuing them with humor and pain and struggle, and comes to the same conclusions as these other stories…it’s never too late to decide who we want to be and what we do with our lives.

I’ve said it before, as have many others, and I’ll say it again, as will many others: Free will and responsibility go hand in hand. There is no “the devil made me do it.” Freedom requires that we take responsibility for our actions.