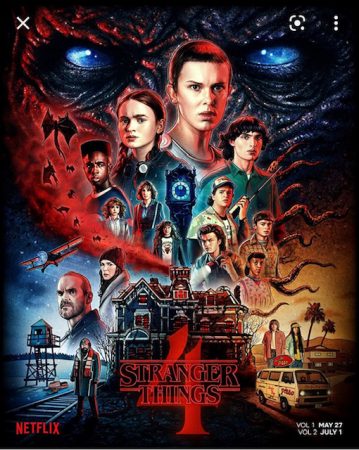 I spent the past few nights watching season four of Stranger Things and loving it at least as much as every other season. Don’t worry…no spoilers here because this isn’t about the gripping and phenomenal storytelling. This is about the relationships…the thing I always come back to…the thing that makes or breaks any story for me.

These are beautifully developed and richly painted relationships that evolve over the arc of the four seasons. The characters are individually interesting and complex, and so are their intertwined relationships. And while I LOVE a good love story, get sucked into the building tension of a will-they/won’t they (of course they will!) hot romance, what I love in this story is the breadth and variety of relationships. As much as this is a scary show about super-natural, never-going-to-happen events, the relationships are completely believable and real.

The core boys have been friends forever. Mike, Lucas, Dustin, and Will. They are nerds who play games together, trick-or-treat together, practically live at each other’s houses. Who hasn’t had (or at least wanted) friends like that when they were young? Friends who will put themselves in harm’s way to protect you…whether that’s lying to your mom about where you were last night or fighting off a Demogorgon.

Then there are the new friends…Eleven, Max, Steve…characters who have their own demons (some literal, some figurative) and aren’t purely likable, but who fit in with the misfits. Who band together to accomplish a common goal and then realize how much they like each other, too. Finding and offering acceptance for who they are, despite being far from perfect (or maybe because of it).

And, of course, Joyce and Hopper. A mom who is willing to sacrifice everything to save her son. She doesn’t care who thinks she’s crazy. She doesn’t care that there are powerful men trying to tell her what to do. She will do what she decides is right for her child, and the other children (since all children are all of our children really). And a dad who lost one child and finds another, learning along the way how to love and hope and close gates to the Upside Down.

There are also awkward, adorable romances between these kids and between some of the adults. All of them finding their way and testing the waters of vulnerability and connection and how to be intimate with one other special person.

And then there are the relationships between the antagonists and protagonists. The Mindflayer who attacks victims by inhabiting them…turning you against yourself. The mad scientist doctor, “Papa,” conducting experiments on his “children,” who love him because they have no one else. (Until they do!) The people you trusted who turn against you, or the people you didn’t like who actually end up saving the day. One thing I really like about this show is that it’s complicated and unclear sometimes who exactly is the hero or the villain, but at other times it is strikingly obvious. They give you complexity and they give you a straight-up, easy-to-hate monster/villain to root against.

And our heroic handful of brilliant, loyal, brave, and determined kids to cheer for as they band together to save their friends and their town and the world.